I know I don't talk about reading too much, at least not on here, but I can get heavily into reading and forget that I have responsibilities at home/school/church/etc.  So I tend to have seasons of reading and seasons of no reading.

While I waited, I also won a free copy of Dannah Gresh's book, "What Are You Waiting For" which recently came in the mail.  So now I have three books that I am anxious to get through.  I'm half way through "Waiting" and loving it.  The other two are "Get Out of That Pit: Straight Talk about God's Deliverance" and "So Long Insecurity: You've Been a Bad Friend to Us." 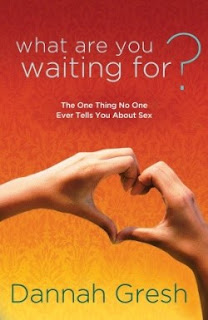 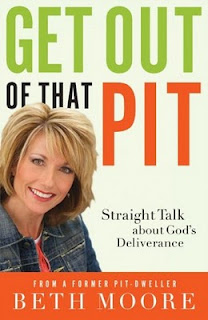 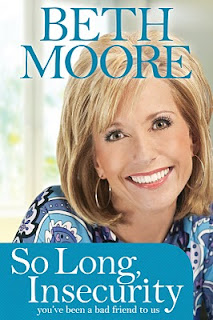 While I get through these books, I'd love to hear from you about good books you've read lately, fiction or non-fiction.  And I'd love to hear what you thought of any of these three books if you've had the chance to read them.
Posted by Wanda at 9:33 PM 2 comments:

I have a very dear group of ladies that I hang out with about once a month. They're my “Gourmet Group.” Don't get weirded out by the word “gourmet” though. We aren't all hoity-toity. We've just decided to try new things together! So once a month, we meet at one of our houses, our hostess has chosen the menu, and we've each brought our assigned dish.
As someone who loves to be in the kitchen, attempting delicious foods for my family, I love having the menu from these evenings to draw on. Many dishes from these nights have been added to my nutritional repertoire. I was reminded of this as I was about to post a meatless meal idea to Green Grandma's Facebook wall. One night we had this amazing veggie lasagna that I have since made a few times. It is quite different from your typical Italian lasagna, but if you enjoy good food and want to add some veggies to your life, I think you'll enjoy this one.

I wish I had a picture to show you, but you'll just have to make it to find out what it looks like. Pair this with a salad and you've got a great dinner, meat-free!
(The original recipe can be found at http://www.epicurious.com/recipes/food/views/Vegetable-Lasagna-232660)
Vegetable Lasagna

If I asked people to describe my husband in one word, they might choose words like organized, planner, particular... They might also say he's funny, helpful, talented. I can't think of too many people that would automatically think “spontaneous!” But spontaneous he was, yesterday. He came home from work early, having exhausted the jobs he could accomplish for that day and went off to get his hairs cut. He came back home and said, “Hey, let's go out tonight! We could use that coupon for The Outback and then go see Dawntreader in 3D.” I asked if he had a babysitter lined up, to which he responded, “Well, no.” As soon as the babysitter got home from school we checked with her and sure enough, she was free. So we were set for our impromptu date.

We got to The Outback at around 5:00 and sat right down and ordered. I think there were about three other tables occupied. It had been a while since we'd been there so when we looked at the menu and prices we nearly keeled over and died from heart failure. After taking our pulses and discovering that neither of us had actually experienced heart failure, we ordered steaks which came with huge loaded baked potatoes and some delicious veggies.

Hubby and I settled in to enjoy our meal and some fun conversation... We thoroughly enjoyed having the chance to chat over dinner without telling the kids to use their napkins to wipe their hands or to grab a cloth to clean up the drink they spilled. As we paid the bill I realized that I have become somewhat of a food snob.

It's not that I'm a snob of all food, just of food that I have to pay an arm and a leg for. In case you didn't already know, Hubby and I are thrifty. We aren't cheap (as my good friend Moni points out) because we do value quality. We just look for the best deals. In everything. So after dinner, on the way to the movie, I expressed this discovery of my “thrifty, food snobbery” to my husband. The Dear answered me with, “That's because everything you make is better than anything you can buy at a restaurant anyway.” I think the idea of being on a date had gone to his head and he was just going for flattery, but I smiled all the same.

And I realized that I would so much rather pay $6/lb for a tenderloin (on sale, of course) and make it at home with some $1/ea baking potatoes, topped with my own toppings, and perhaps some nice Parmesan-crusted asparagus than pay $75 for the same thing at a restaurant. I don't think it's because I'm better than the restaurant chefs, nor is it entirely because of my thriftiness. It's a combination of the two.

You see, spending time away from the kids can be as simple as feeding them first, popping in a kiddie movie, and enjoying a dinner upstairs while they're vegging downstairs. And I think my cooking skills have developed to the point that I enjoy preparing food that tastes good. Not just “good” but good. And knowing that I did it and saved myself $50, that just makes it all the more satisfying. The cut of meat may not be exactly what I would get at a steakhouse, but seeing my husband stuff himself on what I've prepared is immensely more satisfying than handing $75 to a restaurant for doing the same.

I will still enjoy dates with my Best Friend, but I don't think we'll choose $75 dinners on a regular basis. I know he would rather grab a burger anyway. And I think I have some Harvey's coupons somewhere...
Posted by Wanda at 10:45 AM 4 comments: