The kids and I read recently that you can actually make yourself feel better by smiling.  Your emotions are that closely tied to your facial muscles.  We tried it.  It's true.

It's been my goal for a couple years now to get cashiers to smile.  If I'm out with my hubby, I'll challenge him to make the cashier smile before saying good-bye.  He sometimes does some pretty goofy things to get that smile, but he goes for it.

I was telling someone about this recently, over the internet.  As I typed it out I thought, "What's the best way to wrap this up?"

I started typing:  "It's my goal for them to be happy once I leave."  Wait, it's not that I want to make them so miserable that they're glad I'm gone.

I tried again: "It's my goal for them to be happy after they check me out."  Ha ha ha!!!  That's not what I meant either.

Oh well.  I may not be gooderer at this word-putting-together-thing than you, but I hope I made you smile nonetheless.
Posted by Wanda at 9:22 AM 3 comments:

The girl is using some "Free Time" on the piano today.

(The kids get 10 minutes of free time for every song passed.  This means they get a one day reprieve from practicing a new assigned song.  In theory, it motivates them to pass a song and not mess around.)

So my girl leafed through the piano books and found some Christmas carols.  She opened up The First Noel and starting plunking out notes.

Me: What's your time signature?

She, with a look of amazement on her face:  How did you know that it started on 3???

Me (obviously joking):  Because I'm amazing.

May they continue to be amazed at my "vast knowledge" for at least another couple months before they find out I'm a fraud, totally faking this appearance of knowing anything.
Posted by Wanda at 3:44 PM No comments:

The song of my people

The oldest, at the piano:  Mom, tell me a song to play.

Girl:  Don't you know it?  "The hills are aliiiiiive, with the sound of muuuu-sic!"

Geography, according to a 7 year old

He: Let's go... *thinking* Let's see, where's Michigan?  Let's go there!  Or Ohighway or somewhere like that.  Do they still live in Ohighway, Mom?

He:  Like Uncle Eli and Aunt Mags and the rest of their family?

Me:  Yes, they still live in Ohio.

He:  We should go to Ohighway too then.

I have always known November 11 to be "Remembrance Day," as does the rest of the British Commonwealth.  My American friends and family know it as "Veteran's Day."  Whatever you call it, November 11 is the day we remember soldiers who have died for our freedom.

Traditionally, in school, kids will hear a story from a soldier (probably recorded and played back) about their experience in World War I.  After that the entire school would recite/say the poem "In Flanders Fields" together, and we would have a moment of silence to remember soldiers who have died in the line of duty.

We read, we clicked, we researched.

Finally, after 30-some years of roaming this earth, I know why World War I was started, what they were fighting about, who fought on which side, how many Canadians were involved, and who the Canadian Prime Minister was throughout the war.  I knew none of that before today.

Today, the kids and I figured that about 6 out of 10 able-bodied men between the age of 18 and 45 went off to fight in WWI.  We went through a list of 10 men that age within our circle of friends and family and imagined if 6 of them had to go fight in a war for several years.  We didn't want to think about that happening to us and the men we knew and loved.

When I said "lest we forget" in the past, I didn't know what there was to forget.  Today I do.  Today, I appreciate what those men and those families sacrificed for the greater good of much of the world.  Today I know. 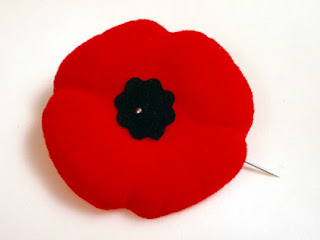 (If you don't know, please take a few minutes to look it up.  There are lots of sites that can fill you in on what happened and why.  It gets down to this:  One man from one country assassinated another man from another country.  The second country declared war and then little by little, others came to join in.  Read up on it.  Find out what really happened.)
Posted by Wanda at 12:39 PM 1 comment:

My youngest two, this morning:

Girl : Hey Squirrel!  Are ya sleeping?

Girl : Hey, SQUIRREL!  Are you using your tail as a blanket?

Girl : I guess you're sleeping.  Or maybe laying down on that branch.

Boy: Yep, he might be dead.  Maybe he's been dead for four days.  There's only one way to find out.

Boy: Well two ways.  You can go out there and try to scare him off.

Older Boy: I touched a dead bird once and I'm okay.

Girl : Don't!  You can get infectionated!

Older Boy: Well I did.  It was at school during science.

Girl : Well I still wouldn't do it.

Boy: What if your favourite animal was a bird?

Girl: I still wouldn't touch it!

Boy: What if you had gloves on?

Girl : I still wouldn't touch it. 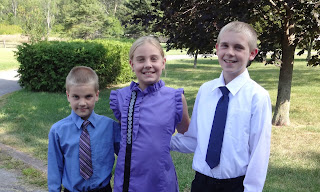 Yesterday our gym class involved raking three yards and two driveways, for a total of 9 fully-packed leaf bags.
This morning we read Acts 19.  When we got to verse 10, we talked about the province of Asia, looked it up on a map of the first century A.D., and decided to write into our calendar for the day to "look up how Asia went from such a small province to such a big continent."  We finished reading Acts 19 (which took a lot longer than usual since we had lots to talk about from that chapter) and moved on to Asia.

When we started reading about Asia, we realized that it was in the northeast part of the world, which led us to talking about Japan and their flag, representing the "land of the rising sun."  We looked up other flags of Asia and the next hour and 15 minutes were devoted to each researching different countries in Asia.  The kids took that time to look up interesting facts about their country, find it on a map, and draw the flag.

After analyzing and comparing each other's countries of choice, we moved on to history, which was about Hammurabi and his code of laws. We decided to make our own code for our family.  The kids had some great ideas!

Since we really weren't following any schedule of learning today, we decided to look up some words from the books we've been reading, since we weren't all sure what they meant.  Maybe tomorrow we can compare notes and figure out how in the world these words can be used in sentences.

As I type, the kids are finishing up their independent work (piano, math, reading, knocking over and cleaning up basil plants, etc.) and all I can hear is loud singing.  In French.  They have their songs from "Jubal", our music and drama co-op, stuck in their heads.

I expect to hear "Still, Still, Still" or "Here We Come a-Wassailing" any moment now.

It's been a full day.  I'm so glad to have been part of it.  And I'm really looking forward to sitting back and putting my feet up after dinner.  Which involves leftovers.  That means I don't have to cook.  Yes!
Posted by Wanda at 4:27 PM 5 comments:

The youngest, on commercials:"I like the Toyota ones."Why?"'Cause they're always about cars."
Posted by Wanda at 7:48 PM No comments: