Acknowledging That ALL Lives Matter

(You may find something that you disagree with here.  If you do, it's fine to share your opinion, but please do so in a kind way that promotes conversation instead of shutting it down.)

Darren Goforth, a 47 year old man who had been a police officer for 10 years was killed this weekend. Reports say that it appears to have been an unprovoked attack, simply because Goforth was in a cop's uniform. Josh Feldman writes:

The sheriff said the attack “strikes at the heart of law enforcement” and noted the “very dangerous national rhetoric that’s out there today.” And when it gets to a point where cops are being assassinated, he said, this rhetoric is “out of control.” “We’ve heard black lives matter,” he said, “all lives matter, well, cops’ lives matter too. So why don’t we drop the qualifier and just say ‘lives matter’ and take that to the bank?”

I'm glad you asked. I'll tell you why.

Saying any one of these things doesn't preclude the others; it merely speaks to a problem that the speaker sees in front of them.

Saying any one of these things doesn't preclude the others, it merely speaks to a problem the speaker sees in front of them.

If someone says to you, "Black lives matter," don't respond with "All lives matter." You wouldn't react that way to a cancer patient.  Imagine that conversation...

"Cancer is a horrible illness."

"Stop saying that! All illnesses are horrible. Can't we accept that ALS and MS are bad too? My Grandma has Parkinson's and Lewy Body Disease. Why are you going on and on about your cancer all the time? Can't you acknowledge my Grandma?"

No one says that. That would be incredible hurtful to the person walking through everything involved in dealing with cancer.

There will always be evil around us. The way we discuss life, with its good and bad, forms the framework for how we act and react. The man who killed the police officer clearly did not understand that all lives matter.  Have that conversation with people if you haven't.  It's a good and important comversation to have.

And when someone tells you that a specific life matters, please listen. There just might be a reason they're feeling that way.

(Inspired by a June 20, 2015 Facebook post by Jamie-Grace Harper. Spurred on by a quotation from Sheriff Ron Hickman.)
Posted by Wanda at 11:11 AM 6 comments:

This is a fully-bad-for-you, totally-indulgent, not-healthy recipe, so any Paleo or gluten-free diet people can just read for funny comments, drool, and move on. The rest of you should just go ahead and print this one off because you're going to be the hit of the next pot luck with this recipe. 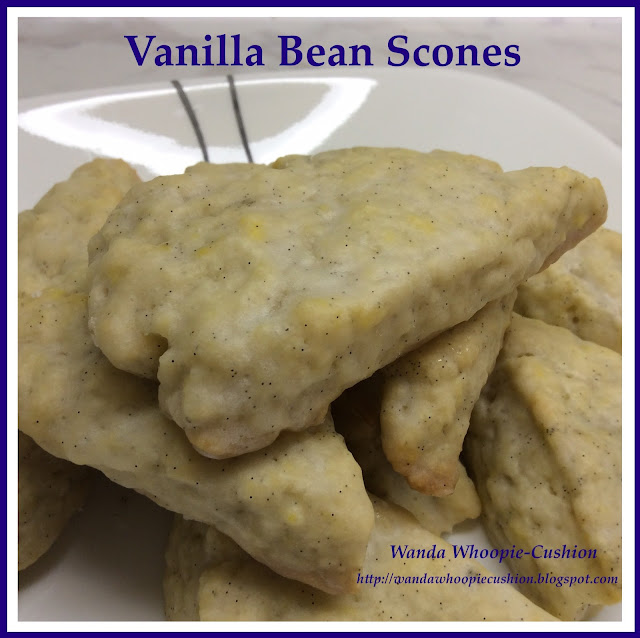 Split 2 vanilla beans lengthwise down the middle and scrape out the goodness, stirring it into cream. Let it all blend together like wide-eyed freshman at a school mixer, for 15 minutes. (Do they still have school mixers these days?)

Sift together the flour, granulated sugar, baking powder, and salt. Incorporate the butter into the dry ingredients using a pastry blender or your fingertips until the mixture resembles a coarse meal.

Add egg to cream mixture, then add to the flour mixture; stir with a wooden spoon until all comes together.

Cut dough into 12 -16 even rectangles. Cut those rectangles in half diagonally. Put on a parchment-lined baking sheet and bake for 12-18 minutes, just until the edges are barely browned. (Cooking time varies greatly depending on size.)

Let scones cool for at least 30 minutes before you attempt to glaze them.

To make the glaze: Split the remaining vanilla bean in half lengthwise and scrape out the goodness. Stir the vanilla bean goo into cream and milk; let it mingle like singles at a speed dating dinner for about 15 minutes. (That doesn't even make sense. If they're speed dating, don't they jump around from person to person within a matter or a couple minutes or so? I don't know; I've never speed dated.) Whisk the milk mixture with the icing sugar until smooth.

When scones are as cold as a polar bear's toe nails (or, really, room temperature would do just fine), baptize those scones until they are fully immersed. After it's had a chance to drip dry, put each scone on a cooling/drying rack for speedier drying. (Speedier drying means speedier eating.)

Let scones sit for about an hour before you indulge. They taste best fully drip-dried.

Sources say these scones will last for several days if placed in a dry, sealed container, but we've never had them last that long.

Paleo "I'll have another" Choco-Peanut-Butter Bites

"Mom, can I have another one of those little circle things?"

I just made these...  No sugar, but so tasty, as evidence by the quote above, just spoken 10 seconds ago by my girl.

Add hot water to dates and let them sit for 5-10 minutes.

Have a coffee or tea.  Brush up on your Latin and Greek. Play Candy Crush and Farmville.

Drain the water from the dates.

Place all ingredients in a small food processor and process for 30 -60 seconds or until the dates are smooth and incorporated.

Roll into balls and try not to eat them all at once.

Have no guilt because that was a guilt-free treat!