It finally snowed last night - a real snow, that sticks!!  As the snow continued to blanket the landscape, I commented to my husband that one of my favourite things about snow is that when I look outside at night, it's so bright out still.  All the lights and the stars and moonlight reflect off the snow and make it just beautifully bright.

Bearing that in mind...

Our youngest woke up at 12:11 last night.  He came out of his room and into ours and said, "I looked at my clock and it says that it's the middle of the night."  His voice was incredulous and he must have been certain that someone had messed with his clock.

My hubby and I stifled a giggle and he said, "It is the middle of the night."

There was a beat before the boy dejectedly walked himself back to his room.  It was so bright out that he was certain it was morning.
Posted by Wanda at 8:49 AM No comments:

Coinciding with my simpler way of doing things, I often choose to clean with vinegar.  My kids clean the bathroom with vinegar.  So I wasn't surprised to hear this from my daughter...


Me (reading jokes):  What does Santa clean his sleigh with?

Me (laughing): Well, actually it says "Comet".  You know...  Like the reindeer.  But I like your answer better!

Green Grandma (who wrote Vinegar Fridays) would be proud of my little girl!

Singing, Dancing, I can't help myself!

I don't typically plug products that I like on here, but I cannot help myself.  This is too important for me to not write about it here...

I recently downloaded an album that I had been looking forward to having.  I only have one other album from this artist (who has six as a solo artist).  I "previewed" the songs on YouTube and decided that I just had to have this album.  It's not my typical music, as I usually go for Christian worship music.  But oh...  I'm so glad I did!

As I listen to this album, I dance, I raise my hands up in joy and worship, I'm brought to tears, I laugh at the silliness, and my heart breaks for what must have inspired a song.  It is socially and theologically amazing (although not all at once.)  And it mentions God very little.

I played this album at my seven year old's birthday party.  One of the young party-goers heard a song and said "Oh, I this is my favourite!  Turn it up!"  He'd never heard the song before but it was catchy and sounded like fun Top 40 Billboard music.  (Admittedly, this album did hit #1 on Billboard the week that it debuted, something done by a "Christian" album only two other times.)

If you've heard of the album, you probably know that I'm writing about tobyMac's "Eye On It".  There are only one or two songs on here that I could do without.  TobyMac sings about keeping a family together (brings me to tears), speaking words of life to the broken-hearted (tears, again), and a few love songs/I can't live without you songs, which are directed at God (oh, I love singing those songs with Toby!) but can easily pass for traditionally romantic songs.  His song for his wife "Made For Me" just makes my heart happy.  What a sweet way to honour his life-time partner!  His son makes another appearance, this time rapping the clever and punny words "I want a Mac, Daddy" going so far as to offering to braid his sister's hair to earn money to get it.  I laugh more every time I hear it.  And my kids love that Jamie Grace (my girl's favourite artist!) makes an appearance on the catchy and very singable "Favourite Song." 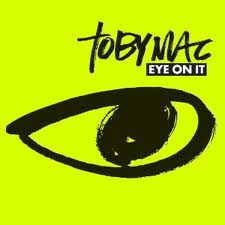