Yesterday was such a busy day at our house. (Thursdays generally are, through the winter.) I have to get our dinner prepared before 12:30.  Yesterday, I had a vague plan for dinner, but at 12:00 I started panicking (ever-so-briefly). I knew I wanted to make some kind of crock pot dish with chicken and kale, but I didn't yet have a recipe in mind. A quick Google-search for "chicken kale crock pot" turned up nothing that I wanted to eat.

So I decided to wing it.

I wung it. (That can't be right, but it sure is fun to say. But if someone swings a rope around and goes on to tell someone else that they swung the rope, surely I can wing a recipe and tell you that I wung it. English according to Wanda.)

So anyway, I wung it.

I put two frozen chicken breasts in a big pan and turned the pan on. I figured I needed some onions and garlic, so in they went. Hmm, maybe a touch of water to keep the garlic from cooking too much. Ah, maybe some chicken stock? Dump 1L of chicken stock in. Now what?

I knew I wanted kale, so I chopped that up and set it aside. I'd put it in when it was close to done cooking.

I took the chicken out and chopped it up because no one wants two whole chicken breasts in their soup!

How about noodles? That'd be tasty! I rifled through the cupboard, dug out some rotini noodles and decided they were WAY too big, so I spent the next few minutes breaking them in half and throwing them in the pot.

I waited a few minutes for the noodles to cook most of the way, added some salt and pepper, and had a taste... Blech! Too bland. It was missing something. After a bit more salt and pepper I was still not satisfied.

Basil! I keep a paste of basil in my fridge for emergencies such as this. In it went and WOWZA! did it make a difference. I threw the kale in, decided it needed corn, threw a handful of that in, and called it done.

I put the soup in the fridge, went to our afternoon class, and rested assured that dinner was handled.

When we got home, the noodles had plumped up nicely and absorbed more of the liquid, so I added another 4 cups of chicken broth and reheated our soup.

The silence around the table, save for a few slurps and "mmms," told me this one was a keeper. 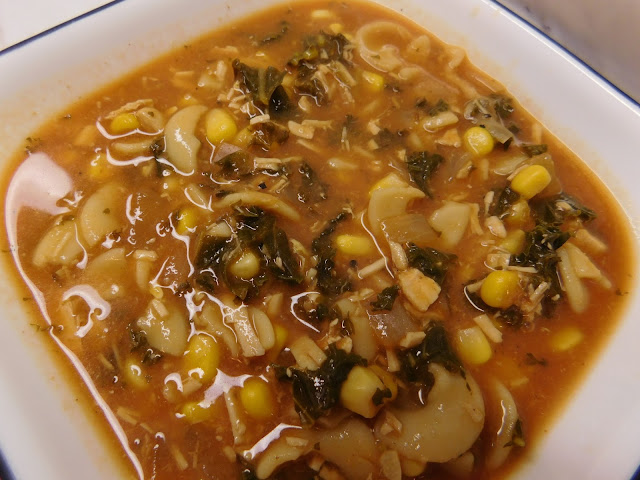 And so, after slightly more fan-fare than was necessary, here's the recipe.

Fry or saute in a large pan:

Add 2 Tbsp water or oil if necessary.
Remove chicken from the pan. Allow it to cool, then chop it into bite-sized pieces and return it to the pan.

(I used rotini, broken in half.)

Allow mixture to cook another 15 minutes, until pasta is tender.  Season as you wish with salt and pepper.

Allow the mixtures to simmer another 5 minutes, then serve.

Listen, as your 10 year-old says, “Mmm! This is one of my favourite meals that you've ever made! 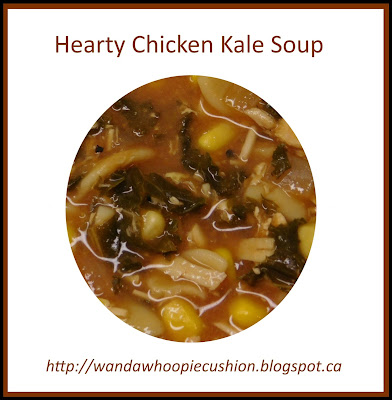