Out of the abundance of the heart...

My nearly-7-year-old boy has developed a recent infatuation with Bey-Blades.  At any given moment, I expect to hear screams of "3-2-1, let it rip!!!!" followed by the sound of spinning tops knocking against each other. 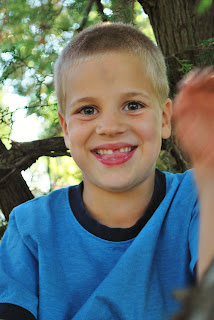 As I was tucking him in at night, he was going on about Bey-Blades and which ones worked well for which type of battle stadium.  I had finally had enough of it and let him know that it was time to pray and get tucked in.  He closed his eyes and started to say his prayer...

"Three, two..."  Eyes popped open and he started to giggle when he realized what he was doing.  :-)