A Birth Story - Part One

Green Grandma has started telling birth stories every Thursday on her blog.  I volunteered to tell a condensed version of mine.  But I also wanted to write out what I remembered in  detail, so that my kids could come back and read all about it later on in life.  If they're ever interested.  So here we have: 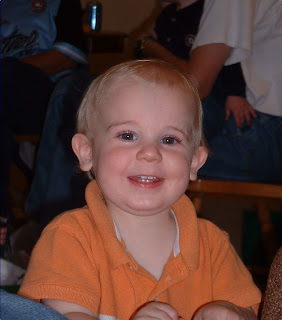 When I found out I was pregnant with Luke, I read as much as I could to prepare myself. Somewhere around my third month, on my third time through “What to Expect When You're Expecting,” I actually read that teeny, tiny little paragraph about midwives.  Being in Ontario, I had no concern about the cost of an OB/GYN.  But being someone who had no idea what to expect, I liked the idea of a medical professional who would treat me as a person instead of a patient.  I found some local midwives and fell in love with them pretty quickly.  We got to know each other pretty well during our 30-45 minute long appointments. The midwives understood and supported my decision to have my baby in the hospital.  I felt SO well-cared for with them.  I was very assured and confident of my ability to get through this labour and delivery process. Until I got to pre-natal class.

A portion of our pre-natal class was designed to test our tolerance for pain.  Our husbands were to hold an ice cube to our wrist.  When I could no longer stand it, I had to tell him to stop.  We timed ourselves.  Of the four pregnant mamas in the room, I was the first to beg my husband to stop.  I like to tell this story because when we met up with the other couples in that room a year later, I discovered that I was the only one to deliver naturally, without pain medication.  I hate pain.  Unless there's a meaningful purpose to it.

But I'm getting ahead of myself.

So we were all set to have our baby.  I had taken my maternity leave two weeks before my Estimated Due Date (EDD) of June 20.  My sister came from 5 hours away to stay with me and massage my feet and help me if I happened to go into labour while she was there.  June 20 came and went.  I wasn't too worried.  The midwives had warned me that most first-time moms go 7-10 days overdue, and that the EDD really was just an estimation.  Some mamas are pregnant beyond 42 weeks they assured me.  Oh great.

Two days after my due date, I woke up early, around 4:30 am.  I felt like I was getting period cramps and had to go the bathroom.  A lot.  Once my intestines were mostly cleared, I tried to go back to sleep, to no avail.  I finally realized that I was having fairly steady contractions and we decided to call the midwives around 6:00 am.  Our beloved midwife, Kristy, said that since I was able to talk to her on the phone through the contractions, they weren't too strong and we should be fine to labour at home for a while longer.  My sister, Aaron and I started timing them, at Kristy's request, and noticed that they were coming every five minutes for 60-90 seconds.  We called her back at 6:30 am.  She said to try taking a bath to slow them down.  I ran the water and took a bath.  It did absolutely nothing for me.

My contractions were getting stronger and lasting longer.  I had Aaron call Kristy back again just after 7:00 am.  After hearing the update she said to get out of the tub, get dressed and get to the hospital ASAP.  She'd meet us there but wouldn't get there before we did.  So she called ahead and told the nurses we were on our way.

I must interject that my sister was a trooper through all of this.  She was there when my water broke as I got out of the tub.  She was there when I vomited what I had eaten that morning.  She helped Aaron and I get through this first-time experience.  She dressed me and got me ready to go to the hospital.

Pain!  That's all I remember about that drive.  I was glad to finally get there, but did not like having to lie on that bed waiting for the Kristy to get there.  They strapped some monitor to my belly and said that everything looked good.  Kristy got there and “checked me.”  I was 8 cm dilated.  After a few more contractions I told her I wanted to try the birthing tub in the other room.  She said there probably wasn't enough time to fill it and checked me again.  10 cm!  Well, that was fast.

I pushed for maybe 20 or 30 minutes on the hospital bed and gave birth to a beautiful baby boy.  They gently, but quickly, wiped him off and handed him to me so I could cuddle with him.  About 30 minutes later, I delivered the placenta with no problems and they put a couple stitches in.  My 7lb 5 oz baby boy was born in a rush on June 22 at 9:33 am.

The rest of the family came to see our new baby while we were still at the hospital.  Great-Grandma Cecil got to meet him just an hour or so after he joined us.

And then, just as soon as we got there, it seemed that we were leaving.  With midwives, their goal is to get you home and recovering where you are most comfortable.  We left the hospital 3.5 hours after Luke was born and had a very pleasant and easy recovery at home.  (Total time in the hospital, about five hours.)  Our midwives came to visit us in our home five times in that first week.  They were so reassuring and encouraging.

We felt incredibly blessed to have had such an amazing experience with our first baby.