Green Grandma has started telling birth stories every Thursday on her blog.  I volunteered to tell a condensed version of mine.  But I also wanted to write out what I remembered in  detail, so that my kids could come back and read all about it later on in life.  If they're ever interested.  So here we have: 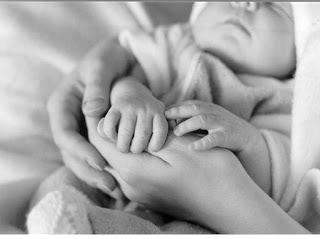 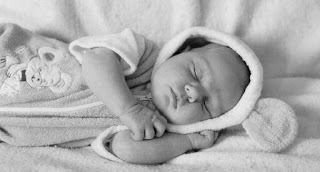 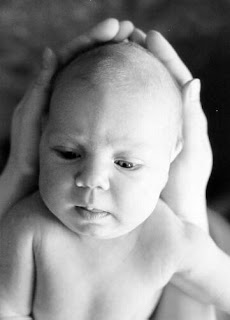 Black and White photos taken by my friend Moni,
who can be found blogging at The Momo Miles.

20 months after Luke was born, I found myself in a very similar predicament.

A month or so before my Estimated Due Date (EDD), our midwives had told us to be prepared for a home-birth.  Since I was only in labour for five hours the first time, it could go even quicker this time.  So we were ready.  We had everything on the list for a home-birth.  But we were still planning a hospital birth.

I was 39 weeks pregnant with #2, a girl this time.  There's something about 4 am...  I woke up just after 4:00 am feeling very much the same as I did with #1.  Only this time, I was still full from “all you can eat pasta” of the night before.  Once that left my stomach, I felt a bit better.

As with the last time, we called the midwife pager around 6:30 and said that we were in labour.  She told us to give it a half hour and see how things were going.

So Aaron was once again on the phone with our midwife, Kristy, around 7:00 am, telling that this was full-blown labour.  She asked what we wanted to do, putting it to us this way, “If you go to the hospital, it will be in an ambulance because you could have this baby at any moment.  If you stay at home, I will be there in a few minutes and you can call if anything changes."  I did NOT want to move anywhere and was very happy to know that Kristy could be at my house shortly, so I said that I wanted to stay at home.

Within 30 minutes, my mother-in-law arrived (to care for our just-waking 20 month old boy) and Kristy arrived (to care for me.)  I had the freedom to walk around my house, choosing to go up and down stairs to speed up labour as necessary.  I seemed to be “transitioning” but not getting anywhere.  All that really meant to me was that my body was in a lot of pain but that baby wasn't working her way out yet.  Kristy offered to break the membrane, knowing that my body was ready and that it would speed things up.  I very readily agreed, so she did.  I was in labour another hour or so and got to use a birthing stool to deliver her.  It was so wonderful!  Aaron was sitting on a chair across from me and I was leaning into him for support as I pushed.  I had my lovely baby girl, weighing 7 lb 6 oz, around 10:20 am on Feb 12, 7 days before my EDD.

One of my favourite memories from this day is that as we sat on the couch, just an hour or two after our little girl entered the world, Aaron made breakfast for everyone.  We sat visiting, midwives (three of them by now), Grandma, and our family of four, over omelets and toast.  It was such a happy moment, one I will cherish, knowing how special and unique it was.


Recovering from the delivery of my second child took more of a toll on me and I was so glad to once again be recovering at home.  The regular visits from the midwives were wonderful too.  They came, again, to check on us five times in the first week.