Green Grandma has started telling birth stories every Thursday on her blog.  I volunteered to tell a condensed version of mine.  But I also wanted to write out what I remembered in detail, so that my kids could come back and read all about it later on in life.  If they're ever interested.  So here we have: 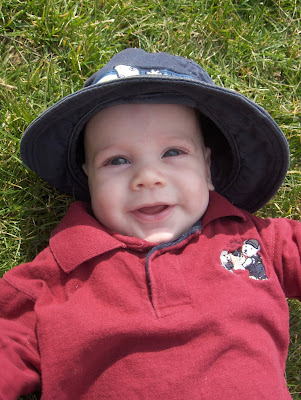 21 months after we met Riley, I was 39 weeks pregnant again.  The third time around, I planned to have my baby at home.  I had a very healthy, normal pregnancy and had no reason to be worried about things going wrong.  All the same, the midwives has assured me that they had all the standard hospital equipment with them in case of emergency, and we were about 7 minutes away from the nearest hospital.  So we planned to stay home when I went into labour with #3.

Unfortunately, I didn't get the now-expected 4:00 am wake-up call this time.  We were up and getting ready to head to our Sunday morning church meeting.  The kids and I were dressed for church and Aaron was about to get ready when I started feeling “not-so-good.”  It was around 8:00 in the morning, one week before the EDD.  I started keep track of contractions and things moved along as expected.  While we waited for Grandma to arrive to take care of the younger kids, we had a little "we-can't-be-at-church" sing-along which I recorded.  I just love that this is what my house sounded like while I was in labour.

Having done this twice, once at home, I was very comfortable and at-ease.  I don't remember a whole lot from this day, because it went just as expected.  Grandma arrived (skipping church to be with us) to care for the younger two as I brought her next grand-child into the world.  We had a different midwife, Kelly, join us to help usher Simon into the world.  Once again I was walking up and down the stairs, bouncing on an exercise ball, and trying to find the best way to move to accomodate the pain.

Kelly finally broke my water to move things along when it was beneficial.  Just as last time, I had #3 about an hour later on that birthing stool.  Simon was born in our bedroom around 2:10 pm on November 27, weighing exactly 7 lbs. 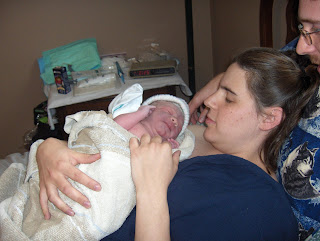 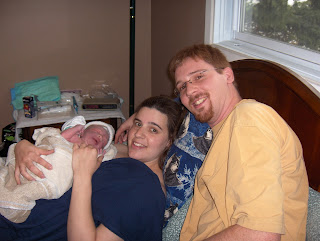 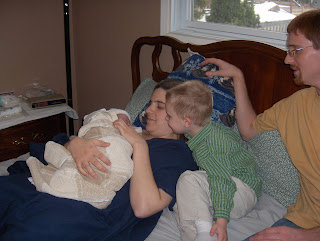 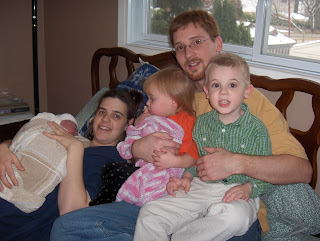 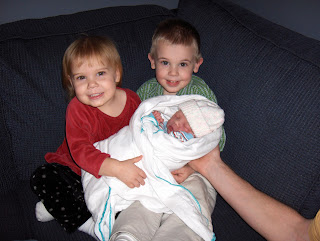 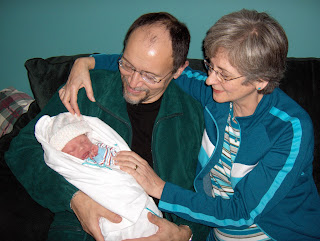 The thing I remember most from my recovery this time is that going from two kids to three kids was so much easier than going from one kid to two kids.  The older two had built-in play-mates in each other, so I found that I had more time to spend resting and caring for Simon.  My mom came to help out for a week or two (as she did with the other two) and she had a chance to love on all three of them while being there to help me as well.  I truly appreciated having her around each time. 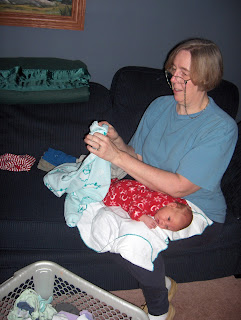 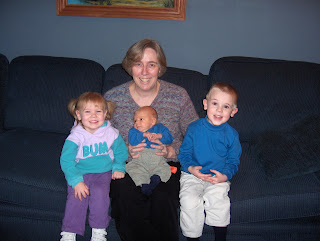